Rachel’s English. What did reduction

HomeRachel’s English. What did reduction 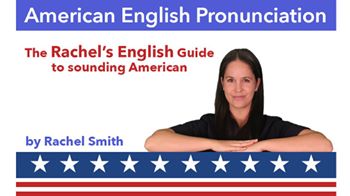 In this American English pronunciation video, we’re going to talk about reducing the phrase ‘what did’.

There are a couple of different ways you’ll hear this phrase reduced. But first, let’s talk about it unreduced:
What did. I don’t think you’ll ever hear it pronounced that clearly by a native speaker, with a released T, what, and then the next word, did. What did. But you will hear ‘what did’. ‘What did’, with a Stop T and a D sound. “What did”. More common is ‘what did’: still clearly two words here, but we drop the T and flap the D (it’s between two vowels). This helps you say the two words smoothly. What did, that’s choppy. What did, that’s smooth.

What did. The lips round into a tight circle, and then everything relaxes for the UH as in BUTTER vowel. Wha-, wha-. What did. To make the flap sound, the top front part of the tongue bounces against the roof of the mouth. Whaaaaa-diiiii-. Wha-di-, wha-di-. Next we have the IH vowel, but this can be very fast. Think of this as an unstressed syllable, the previous syllable being stressed. DA-da, what did, what did. So rather than being a fully-pronounced IH vowel, did, did, it’s sort of quiet, did, did. Low on energy. Then the tongue goes back to the roof of the mouth for the second D. What did, what did. What did she say? What did they do? What did it mean?

You’ll also hear a reduction that goes one step further. You’ll often hear people drop the word ‘did’ and instead make a D sound at the end of what: wud, wud.
Whud-she say? Whud-they do? So now it’s not two syllables, what did, but just one, wud. Whud she say? Whud they do?

The reason Americans reduce syllables like this is to get the unimportant things out of the way. Whud she say? ‘What’ and ‘say’ are the two most important words there, so they should be the clearest. The others can be really fast, and we’ve established that changing the T in ‘what’ do a D signifies ‘did’.

Let’s talk about other words that you’ll hear with this phrase that also reduce. He. You’ll almost always hear this with no H. Just the EE vowel. Wu-dee, wu-dee . Link it to the D sound. Wu-dee. What did he say? What did he do? What did he think? Why do we drop the H in ‘he’, but not the SH in ‘she’? I don’t know! I’m not sure why that evolved, but I know it’s a very consistent reduction in American English. I have another video about dropping the H to check out, see the link below.

Let’s practice several ‘what did phrases’. I’m going to do them all in the most reduced form. Repeat each time.

You’ll hear this a lot. Now you know what you’re hearing. Use this yourself to smooth out your speech, link your words together, and place more emphasis on the important words in a sentence.

If there is a phrase or a combination of words you’d like help pronouncing, please put it in the comments below. Don’t forget to sign up for my mailing list by clicking here or in the description below to keep up with all my latest videos – it’s free.

That’s it, and thanks so much for using Rachel’s English.